Previous: A columnist's take on family life in 21st century | Next: A special tribute to our friends in British Columbia 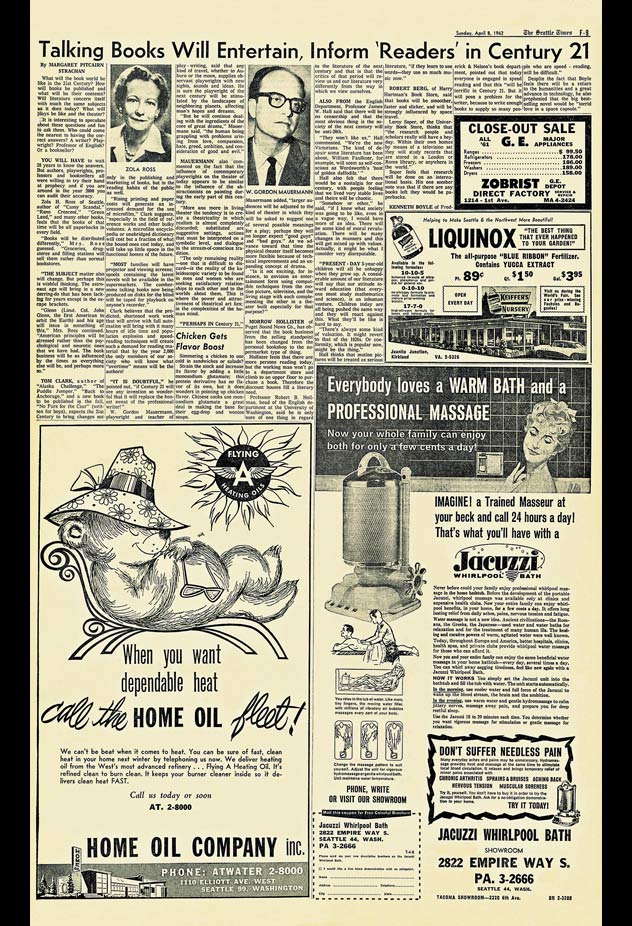 Previous: A columnist's take on family life in 21st century | Next: A special tribute to our friends in British Columbia

What will the book world be like in the 21st Century? How will books be published and what will be their contents? Will literature concern itself with much the same subjects as it does today? What will plays be like and the theater?

It is interesting to speculate about these questions and fun to ask them. Who could come the nearest to having the correct answers? A writer? Playwright? Professor of English? Or a bookseller?

YOU WILL HAVE to wait 38 years to know the answers. But authors, playwrights, professors and booksellers all were willing to try their hand at prophecy an if you are around in the year 2000 you can audit their accuracy.

Zola H. Ross of Seattle, author of "Cassy Scandal," "Reno Crescent," Green Land," and many other books, feels that the books of that time will be all paperbacks in every field.

"Books will be distributed differently," Mrs. Ross guessed. Groceries, drugstores and filling stations will sell them rather than normal bookstores.

"THE SUBJECT matter also will change, But perhaps this is wishful thinking. The astronaut age will bring in a new derring-do that has been lacking for years except in the escape brackets.

"Glenn (Lieut. Col. John Glenn, the first American to orbit the Earth) and his age will issue in something of this," Mrs. Ross continued. "American principles will be stressed rather than the psychological and neurotic ones that we have had. The book business will be as influenced by the times as everything else will be, and perhaps more so."

TOM CLARK, author of "Alaska Challenge," "The Puddle Jumper," "Back to Anchorage," and a new book to be published in the fall, "No Furs for the Czar" (written for boys), expects the 21st Century to bring changes not only in the publishing and marketing of books, but in the reading habits of the public as well.

"Rising printing and paper costs will generate an increased demand for the use of microfilm," Clark suggest, "especially in the field of reference works and other bulky volumes. A microfilm encyclopedia or unabridged dictionary will cost but a fraction of what the bound ones cost today, and will take up little space in the functional homes of the future.

"MOST families will have projector and viewing screens; spools containing the latest novels will be available in the supermarkets. The cumbersome talking books now being produced on disks for the blind will be taped for playback on anyone's recorder."

Clark Believes that the predicted, shortened work week that will arrive with full automation will bring with it many hours of idle time and population explosion and speed-reading techniques will create such a demand for reading material that by the year 2000 the only members of our society who will know what "overtime" means will be the authors!

"IT IS DOUBTFUL," he pointed out," if Century 21 will see any invention so wonderful that it will replace the honest sweat of the professional writer!"

W. Gordon Mauermann, playwright and teacher of play-writing, said that any kind of travel, whether to Auburn or the moon, supplies observant playwrights with new sights, sounds and ideas. He is sure the playwright of the next century will be stimulated by the landscapes of neighboring planets, affecting man's hopes and dreams.

"But he will continue dealing with the ingredients of the core of great drama," Mauermann said, "the human being grappling with problems arising from love, compassion, hate, greed, ambition, and consideration of good and evil."

MAUERMANN also commented on the fact that the influence of contemporary playwrights on the theater of today appears to be similar to the influence of the abstractionists on painting during the early part of this century.

"More and more in living theater the tendency is to create a theatricality in which realism is almost completely discarded; substituted are suggestive settings, actions that must be interpreted on a symbolic level, and dialogue in the stream-of-conscious tradition.

"The only remaining reality - one that is difficult to discard - is the reality of the kaleidoscopic variety to be found in men and women who are seeking satisfactory relationships to each other and to the worlds about them. This is where the power and attractiveness of theatrical art lies; in the complexities of the human mind.

"PERHAPS IN Century 21," Mauermann added, "larger audiences will be adjusted to the kind of theater in which they will be asked to suggest one of several possible meanings for a play; perhaps they will no longer expect "good guys" and "bad guys." As we advance toward that time the physical theater itself becomes more flexible because of technical improvements and an expanding concept of drama.

"Is it not exciting, for instance, to envision an entertainment form using compatible techniques from the motion picture, television, and the living stage with each complementing the other in a theater build especially for that purpose?"

"MORRO HOLLISTER of Puget Sound News Co., has observed that the book business from the selling standpoint has been changed from personal bookshop to the supermarket kind of thing.

Hollister feels that there are more persons reading today, but the working man won't go to a department store and climb to an upper floor to purchase a book. Therefore the discount houses fill a literary need.

Professor Robert B. Heilman, head of the English department at the University of Washington, said he is only sure of one thing in regard to the literature of the next century and that is that the critics of that period will review us and our literature very differently from the way in which we view ourselves.

ALSO FROM the English Department, Professor James W. Hall said that there will be no censorship and that the most obvious thing is the society of next century will be anti-20th.

"They won't like us," Hall commented. "We're the new Victorians. The kind of despair some literature has been about, William Faulkner, for example, will seem as self-conscious as Wordsworth's 'Host of golden daffodils.'"

Hall also felt that there would be a nostalgia for our century, with people feeling that we lived very stable lives and theirs will be chaotic.

"Somehow or other," he said, "if I knew what society was going to be like, even in a vague way, I would have more of an idea. There will be some kind of moral revaluation. There will be many changes in manners and this will get mixed up with values. Actually, it might be what I consider very disreputable."

"PRESENT-DAY 5-year-old children will all be unhappy when they group up. A considerable amount of our literature will say that our attitude toward education (that everyone must study mathematics and science), is an inhuman venture. Children today are all being pushed the same way and they will react against this. What they'll be like is hard to say.

"There's always some kind of valuation. It might revert to that of the 1920s. Or conformity, which is popular now, might be the thing."

Hall thinks that motion pictures will be treated as serious literature, "if they learn to use words - they use so much music now."

ROBERT BERG, of Harry Hartman's Book Store, said that books will be smoother, faster and slicker, and will be strongly influenced by space travel.

Leroy Soper, of the University Book Store, thinks that "the research people and scholars really will have a heyday. Within their own homes by of means of a television set they will study records that are stored in a London or Rome library, or anywhere in the world."

Soper feels that research will be done on an international basis. His one somber note was that if there are any books left they would be paperbacks.

KENNETH BOYLE of Frederick & Nelson's book department, pointed out that today everyone is engaged in speed reading and that this "will be terrific in Century 21. But it will pose a problem for the writer, because to write enough books to supply so many people who are speed-readers will be difficult."

Despite the fact that Boyle feels there will be a return to the humanities and a great advance in technology, he also prophesied that the big best-selling novel would be "torrid love in a space capsule."