A columnist's take on family life in 21st century

Previous: Shining a light on the Needle | Next: Book folks predicted speed-reading explosion 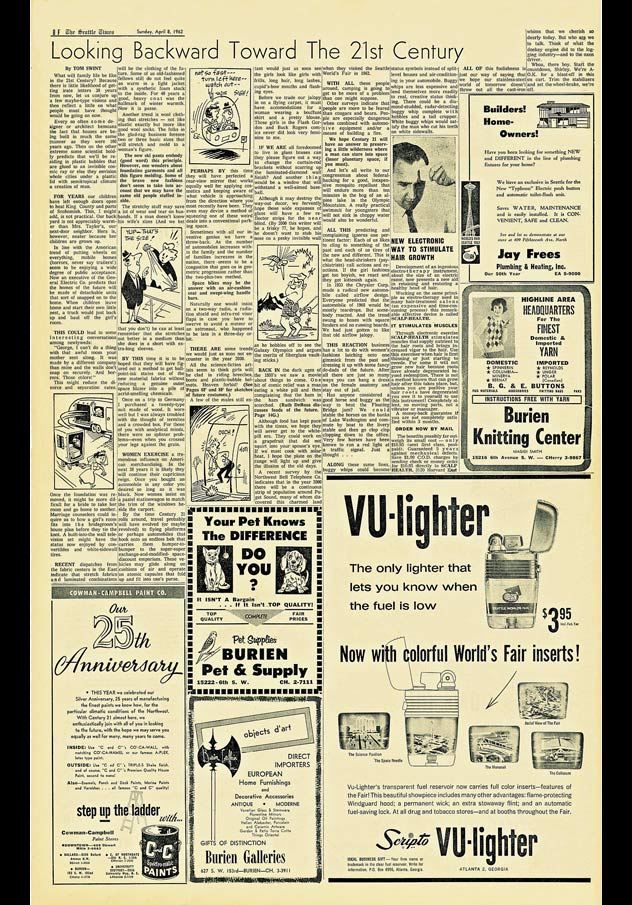 Previous: Shining a light on the Needle | Next: Book folks predicted speed-reading explosion

What will family life be like in the 21st Century? Because there is little likelihood of getting irate letters 38 years from now, let us conjure up a few maybe-type visions and then reflect a little on what people must have thought would be going on now.

Every so often some designer or architect bemoans the fact that houses are being built in much the same manner as they were 100 years ago. Then on the other extreme some scientist boldly predicts that we'll be residing in plastic bubbles that are glued to an invisible cosmic ray or else they envision whole cities under a plastic lid with semitropical climate a creation of man.

FOR YEARS our children have left enough doors open to heat King County and parts of Snohomish. This, I might add, is not practical. Our back yard is not appreciably warmer than Mrs. Taylor's, our next-door neighbor. Hers is, however, neater because her children are grown up.

In line with the American trend of putting wheels on everything, mobile homes (horrors, never say trailers!) seem to be enjoying a wide degree of public acceptance. Now an executive of the General Electric Co. predicts that the homes of the future will be made of detachable units that sort of snapped on to the home. When children leave home and start their own little nest, a truck would just back up and haul off the girl's room.

THIS COULD lead to some interesting conversation among newlyweds:

"George, I can't do a thing with that awful room your mother sent along. It was made by a different company than mine and walls don't snap on securely. And horrors. Those colors!"

This might reduce the divorce and separation rates. Once the foundation was removed, it might be more difficult for a bride to take her room and go home to mother. Marriage counselors could inquire as to how a girl's room fits into the bridegroom's house plan before they tie the knot. A built-into-the-wall television set might have the status now enjoyed by convertibles and white-sidewall tires.

RECENT dispatches from the fabric centers in the East indicate that stretch fabrics and laminated combinations will be the clothing of the future. Some of us old-fashioned fellows still do not feel quite as warm in a light jacket with a synthetic foam stuck to the inside. For 40 years a good, heavy coat was the hallmark of winter warmth. Now it is passÃÆÃ'Ãâ 'ÃÆââ¬Â 'ÂÂÂÂÂ©.

Another trend is wool clothing that stretches - not like elastic exactly but more like good wool socks. The folks in the glad-rag business foresee two or three basic sizes that will stretch and mold to a woman's figure.

The new ski pants embody (good word) this principle. However, one wonders about foundation garments and all this figure molding. Some of the brave new fashions don't seem to take into account that we may have the same old people stuffed inside.

The stretchy stuff may save a lot of wear and tear on husbands. If a man doesn't know his wife's sizes (And we bet that you don't) he can at least remember that she stretches out better in a medium than she does in a short with extra-long sleeves.

BY THIS time it is to be hoped that they will have figured out a method to get ballpoint-ink stains out of the new material fabrics without reducing a genuine outer space blazer into a pile of acrid-smelling chemicals.

Once on a trip to Germany I purchased a tweedy-type suit made of wood. It wore well but I was always troubled with the thought of termites and a crowded bus. For those of you with analytical minds, there were no splinter problems - even when you crossed your legs against the grain.

WOMEN EXERCISE a tremendous influence on American merchandising. In the next 38 years it is likely they will continue their capricious reign. Once you bought an automobile in any color you desired so long as it was black. Now women insist on a pastel stationwagon to match the trim of the windows beside the carport.

By the time Century 21 rolls around, travel probably will have evolved (or maybe revolved) to flying platforms or perhaps automobiles that hook onto an endless belt that carries them bumper-to-bumper to the super-super exchange-and-modified space discount emporium. These vehicles may glide along on cushions of air and operate on atomic capsules that fold up and fit into one's purse.

PERHAPS BY this time they will have perfected a rear-view mirror that works equally well for applying cosmetics and keeping aware of what vehicle is approaching from the direction where you most recently have been. They even may devise a method of squeezing one of these weird deals into a conventional parking space.

Sometimes with all our inventive genius we have a throw-back. As the number of automobiles increases within the family and the number of families increases in the nation, there seems to be a congestion that goes on in geometric progression rather than the two-plus-two method.

Space bikes may be the answer with an air-cushion seat and swept-wing handle bars.
Naturally one would insist on a two-way radio, a radiation shield and infrared visor flaps in case you have to swerve to avoid a meteor or an astronaut, who happened to be late in a three-day orbit.

THERE ARE some trends we would just as soon not encounter in the year 2000.

All the science-fiction artists seem to think girls will be clad in riding breeches, boots and plastic-bubble helmets. Heaven forbid! A few of the males still extant would just a soon see the girls look like girls with frills, long hair, long lashes, cupid's-bow mouths and flashing eyes.

Before we trade our jalopy in for a flying carpet, it must have accommodations for a woman wearing a bouffant skirt and a pretty blouse. Those girls in the Flash Gordon and Buck Rogers comics never did look very feminine to me.

IF WE ARE all foredoomed to live in glass houses can they please figure out a way to change the curtain-rod brackets without scarring up the laminated-diamond all finish? And another thing would be a window that will withstand a well-aimed baseball.

Although it may destroy the way-out dÃÆÃ'Ãâ 'ÃÆââ¬Â 'ÂÂÂÂÂ©cor, we fervently hope those wide expanses of glass will have a few reflector strips for the near blind. (By 2000 this writer will be a frisky 77, he hopes, and he doesn't want to stub his nose on a pesky invisible wall as he hobbles off to see the Galaxy Olympics and argues the merits of fiberglass vaulting sticks.)

BACK IN the dark ages of the 1930's we saw a movie about things to come. One bit of comic relief was a man eating a white pill and then complaining that the ham in the ham sandwich was scorched.

Although food has kept pace with the times, we hope they will never get to the white-pill era. They could work on a grapefruit that did not squirt into your spouse's eye. If we must cook with solar heat, I hope that plate on the range will light up and give the illusion of the old days.

A recent survey by the Northwest Bell Telephone Co. indicates that in the year 2000 there will be a continuous strip of population around Puget Sound, many of whom will have discovered this charmed land when they visited the Seattle World's Fair in 1962.

WITH ALL these people around, camping is going to get to be more a problem than one might suppose.

Other surveys indicate that people are more to be feared than cougars and bears. People are especially dangerous when combined with automotive equipment and/or a means of building a fire.

We hope Century 21 will have an answer to preserving a little wilderness where a man can stare into space (inner planetary space, if you must).

And let's all write to our congressman about federal backing for a good, inexpensive mosquito repellant that will endure more than 10 minutes in the bog of an alpine lake in the Olympic Mountains. A really practical swimsuit for youngsters that will not sink in choppy water would also be wonderful.

ALL THIS predicting and complaining ignores one pertinent factor: Each of us likes to cling to something of the past and each of us tires of the new and different. This is what the head-shrinkers (psychologists) call actions and reactions. If the girl fashions get too boyish, we react and they get kittenish again.

In 1933 the Chrysler Corp. made a radical new automobile called airflow design. Everyone predicted that the automobile of 1960 would be mostly teardrops. But somebody reacted. And the trend swung to boxes and square fenders and no running boards. We had just gotten to like that old airflow jalopy.

THIS REACTION business had a lot to do with women's fashions latching onto one gimmick from the past and dressing it up with some fancy do-dads of the future. After all there are just so many ways you can hang a dress on the female anatomy and stay out of jail.

Has anyone considered a good horse and buggy as the way to beat the Floating Bridge jam? We could stable the horses on the banks of Lake Washington and commute by boat to the livery stable and then go clop clop clopping down to the office. Very few horses have been known to run a red light at a traffic signal. Just a thought ...

ALONG these same lines, buggy whips could become status symbols instead of split-level houses and air-conditioning in your automobile. Buggy whips are less expensive and lend themselves more readily to real, creative status thinking. There could be a diamond-studded, radar-detecting buggy whip complete with hobbles and tail crupper. White buggy whips would satisfy the man who cut his teeth on white sidewalls.

ALL OF this foolishness is just our way of saying that we hope our stainless-steel world of tomorrow doesn't throw out all the cast-iron whims that we cherish so dearly today. But who are we to talk. Think of what the donkey engine did to the logging industry - and to the oxen driver.

Whoa, there boy. Start the countdown, Shirley. We're A-OK for a blast-off in this ox cart. Trim the stabilizers and set the wheel-brake, we're off.