Kim Ahern, 47, moved sons Jack, 9, and Tom, 19, as well as their cockapoo, Gracie, from Chicago to Seattle in April after reading in an article online that jobs would open up in the region at the end of the recession.

Tom agreed to watch Jack while Kim looked for work and settled into their new city. A former administrative assistant, she hoped to find clerical work here and enroll Jack in a school in Shoreline. 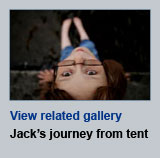 Before moving, Kim said she called social service agencies in Seattle, and was promised hotel vouchers on their arrival. When they reached the Seattle, however, the agency told her the vouchers were no longer available due to funding issues. Kim reluctantly moved the family into Nickelsville, her backup option. Nickelsville is the only tent city in King County that allows children on a long-term basis.

Kim supported her family through unemployment checks and partial child support while living in the tent city, which was temporarily located in the Central District, then Skyway.

She navigated a complicated web of social-service agencies, while keeping Jack clean and fed without running water and electricity at times. After securing financial assistance with rent from a couple of local organizations, the family in mid-May moved to the University District.

Although they have a room of their own, Kim and Jack still struggle. Tom left for a few months during summer, leaving Kim without options for child care. He is now researching his options for going back to school and may be able to help with some child care for Jack. Although money is tight, they have each other, Jack's active imagination and a new city to explore.

Mobile Users | If viewing on a mobile or non-Flash enabled device, watch the videos here.