A cross-Sound bridge? A highway around Lake Washington? 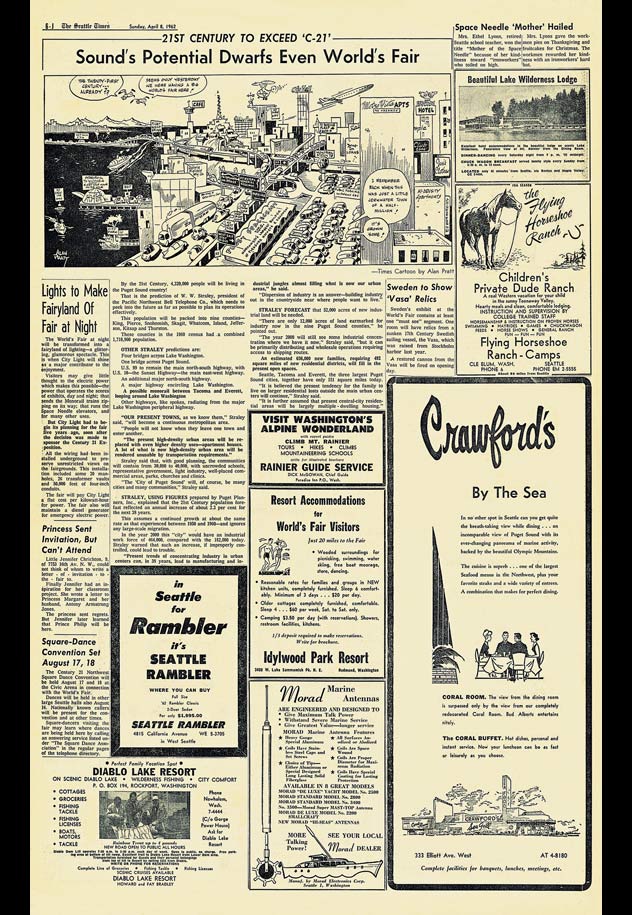 That is the prediction of W.W. Straley, president of the Pacific Northwest Bell Telephone Co., which needs to peek into the future as far as possible to plan its operations effectively.

OTHER STRALEY predictions are:


"OUR PRESENT TOWNS, as we know them," Straley said, "will become a continuous metropolitan area.

"People will not know when they leave one town and enter another.

Straley said that, with good planning, the communities will contain from 30,000 to 40,000, with uncrowded schools, representative government, light industry, well-placed commercial areas, parks, churches and clinics.

"The 'City of Puget Sound' will, of course, be many cities and many communities," Straley said.

STRALEY, USING FIGURES prepared by Puget Planners, Inc., explained that the 21st Century population forecast reflected an annual increase of about 2.3 percent for the next 38 years.

This assumes a continued growth at the same rate as that experienced between 1950 and 1960 - and ignores any large-scale migration.

In the year 2000 this "city" would have an industrial work force of 464,000, compared with the 182,000 today. Straley warned that such an increase, if improperly controlled, could lead to trouble.

"Present trends of concentrating industry in urban centers can, in 38 years, lead to manufacturing and industrial jungles almost filling what is now our urban areas," he said.

"Dispersion of industry is an answer - building industry out in the countryside near where people want to live."

STRALEY FORECAST that 52,000 acres of new industrial land will be needed.

"There are only 12,000 acres of land earmarked for industry now in the nine Puget Sound counties," he pointed out.

"The year 2000 will still see some industrial concentration where we have it now," Straley said, "but it can be primarily distributing and wholesale operations requiring access to shipping routes.

Seattle, Tacoma and Everett, the three largest Puget Sound cities, together have only 151 square miles today.

"It is believed the present tendency for the family to live on larger residential lots outside the main urban centers will continue," Straley said.

"It is further assumed that present central-city residential areas will be largely multiple-dwelling housing."