On the brink of swift urbanization 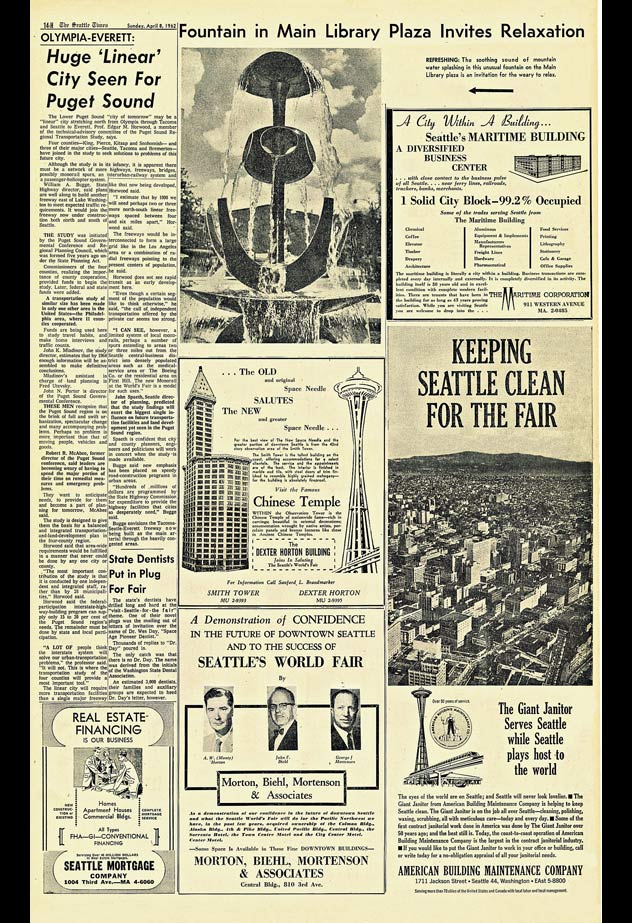 The Lower Puget Sound "city of tomorrow" may be a "linear" city stretching north from Olympia through Tacoma and Seattle to Everett. Prof. Edgar M. Horwood, a member of the technical advisory committee of the Puget Sound Regional Transportation Study, says.

Four counties - King, Pierce, Kitsap and Snohomish - and three of their major cities - Seattle, Tacoma and Bremerton - have joined in the study to seek solutions to problems of this future city.

Although the study is in its infancy, it is apparent there must be a network of more highways, freeways, bridges, possibly monorail spurs, an interurban-railway system and a passenger helicopter system.

William A. Bugge, State Highway director, said plans are well along to build another freeway east of Lake Washington to meet expected traffic requirements. It would join the freeway now under construction both north and south of Seattle.

THE STUDY was initiated by the Puget Sound Governmental Conference and Regional Planning Council, which was formed five years ago under the State Planning Act.

Commissioners of the four counties, realizing the importance of county cooperation, provided funds to begin the study. Later, federal and state funds were added.

A transportation study of similar size has been made in only one other area in the United States - the Philadelphia area, where 11 counties cooperated.

Funds are being used here to study travel habits, and make home interviews and traffic counts.

John K. Mladinov, the study director, estimates that by 1964 enough information will be assembled to make definitive conclusions.

Mladinov's assistant in charge of land planning is Fred Utevsky.

THESE MEN recognize that the Puget Sound region is on the brink of full and swift urbanization, spectacular change and many accompanying problems. Perhaps no problem is more important than that of moving people, vehicles and goods.

Robert R. McAbee, former director of the Puget Sound conference, said leaders are becoming weary of having to spend the major portion of their time on remedial measures and emergency problems.

They want to anticipate needs, to provide for them and become a part of planning for tomorrow, McAbee said.

The study is designed to give them the basis for a balanced and integrated transportation-and-land-development plan in the four-county region.

Horwood said that area-wide requirements would be fulfilled in a manner that never could be done by any one city or county.

"The most important contribution of the study is that it is conducted by one independent and integrated staff, rather than by 26 municipalities," Horwood said.

Horwood said the federal-participation interstate-highway-building program can supply only 15 to 20 percent of the Puget Sound region's needs. The remainder must be done by state and local participation.

"A LOT OF people think the interstate system will solve our urban-transportation problems," the professor said. "It will not. This is where the transportation study of the four counties will provide a most important tool."

The linear city will require more transportation facilities than a single major freeway like that now being developed, Horwood said.

"I estimate that by 1990 we will need perhaps two or three more north-south linear freeways spaced between four and six miles apart," Horwood said.

The freeways would be interconnected to form a large grid like in the Los Angeles area or a combination of radial freeways pointing to the present centers of population, he said.

Horwood does not see rapid transit as an early development here.

"Even though a certain segment of the population would like to think otherwise, he said, "the call of independent transportation offered by the private car seems too strong.

"I CAN SEE, however, a limited system of local monorails, perhaps a number spurs extending to areas two or three miles out from the Seattle central-business district into densely populated areas such as the medical-service area or The Boeing Co. or the residential area on First Hill. The new Monorail at the World's Fair is a model for such uses."

John Spaeth, Seattle director of planning, predicted that the study findings will exert the biggest single influence on future transportation facilities and land development yet seen in the Puget Sound region.

Spaeth is confident that city and county planners, engineers and politicians will work in concert when the study is made available.

"Hundreds of millions of dollars are programmed by the State Highway Commission for expenditure to provide the highway facilities that cities so desperately need," Bugge said.

Bugge envisions the Tacoma-Seattle-Everett freeway now being built as the main arterial through the heavily congested areas.