A guide to the fair grounds

Previous: Fair looks ahead with "Century 21" theme | Next: No floating 520 bridge, or I-5 freeway 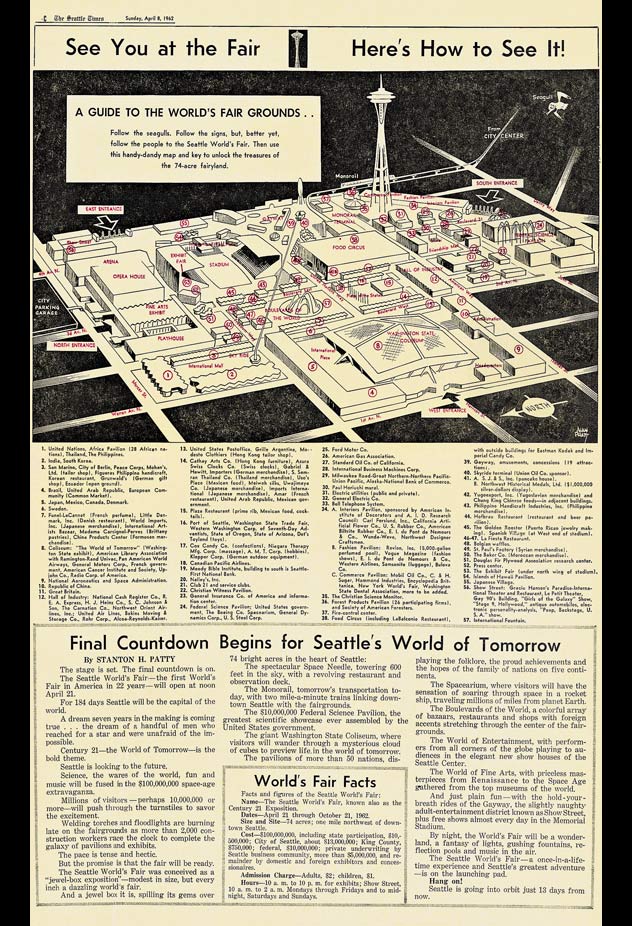 Previous: Fair looks ahead with "Century 21" theme | Next: No floating 520 bridge, or I-5 freeway

The stage is set. The final countdown is on.

For 184 days Seattle will be the capital of the world.

A dream seven years in the making is coming true ... the dream of a handful of men who reached for a star and were unafraid of the impossible.

Century 21 - the World of Tomorrow - is the bold theme.

Seattle is looking to the future.

Millions of visitors - perhaps 10,000,000 or more - will push through the turnstiles to savor the excitement.

Welding torches and floodlights are burning late on the fairgrounds as more than 2,000 construction workers race the clock to complete the galaxy of pavilions and exhibits.

The pace is tense and hectic.

But the promise is that the fair will be ready.

The Seattle World's Fair was conceived as a "jewel-box exposition" - modest in size, but every inch a dazzling world's fair.

And a jewel box it is, spilling its gems over 74 bright acres in the heart of Seattle:


By night, the World's Fair - a once-in-a-lifetime experience and Seattle's greatest adventure - is on the launching pad.

Seattle is going into orbit just 13 days from now.