Join the informed, opinionated journalists of The Times' editorial staff in lively discussions at our blog Ed Cetera.

Civil Disagreement: Time to Clamp Down on Guns?

Civil disagreements, with Lynne Varner and Bruce Ramsey of the Seattle Times editorial board, is a weekly feature of the Ed Cetera blog. Here Lynne and Bruce debate gun control laws in the wake of the shooting deaths of four Lakewood, Wa. police officers and a month earlier, a Seattle Police Officer 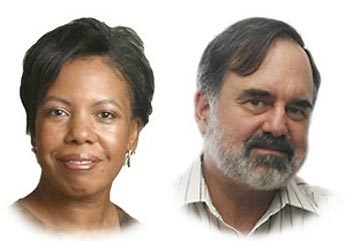 Lynne Varner: Bruce, I'll be accused of being a knee-jerk reactionary but I have to admit what is true: I've been thinking about gun control laws since the morning I awoke to the news that four police officers were gunned down inside a coffee shop.

Yes, I've read the Second Amendment but no right is absolute. Police officers and other symbols of government take on a certain amount of risk to do their jobs, if restricting the flow of guns or making it more difficult to purchase guns eases our collective minds somewhat, we should consider it. It is true, that a vibrant gun market would exist outside the confines of the law. Nonetheless, we could all rest easier knowing the rules of law extend even to gun ownership.

Officials in Washington state and Arkansas are arguing over who could've done the most to keep Clemmons in jail. But I'm looking beyond Clemmons. He's thankfully dead. How do we stop the others who share his callous disregard for human life?

Bruce Ramsey: You don't stop it entirely, Lynne. In this case it looks as if the people in the corrections system knew enough about him to know not to let him out. And yet they did. If this case tells you to fix something, it tells you to fix that. Fix the individual mistake.

Lynne Varner: I don't think its a case of either or but both. To see a litany of the bone-headed errors that led to an awful tragedy check out this story and this one. There are plenty of changes that need to be made in the area of parole and clemency. But back to the need to control the amount of guns on the street, if you want to spend the night up wall-eyed with fear check out this Department of Justice webpage detailing the kinds of inmates in our state prisons. Here's one little factoid: at least 8% of murderers on death row committed murders before doing the crime that put them on death row. A third of them were on parole or probation at the time they committed their capital offenses and 65% had prior felony convictions.

These guys, or anyone they might turn to for help, ought to find it as difficult as possible to get their hands on a gun.

Bruce Ramsey: That's curtailing the rights of everyone, and that's a different matter.

I used to be in favor of gun control. I lived in Hong Kong for a while. The only way an ordinary citizen could have a lawful gun was to keep it at a target-shooting club. In Hong Kong the weapon of choice of petty criminals was a knife, and the homicide rate was about one-quarter the U.S. rate. I came back to Seattle in 1993, when the U.S. crime rate was at about a 60-year high. There was a drive-by shooting at Ballard High School, and a student killed (not even the one the shooter intended). And I thought: this is ridiculous. We should get rid of guns.

And if I were designing a society from scratch--a society on Mars, maybe.--I would do that. But we don't start with a blank slate. A right to own small arms is deep in our culture, and is protected in the U.S. Constitution and even stronger in the 1889 Washington Constitution. I revere those documents for all the rights they protect, and I don't want to cut any more holes in them. We have to live with gun rights, and I think we can by focusing on crime itself rather than the tools criminals may use.

Lynne Varner adds:Focusing on the crime and not the tools is shortsighted as any security expert for banking, technolology or other industries could tell you. You'll never deter all crimes, so targeting the tools criminals use is a way to prevent or at least make criminal activities more difficult. In 2006, 10,700 people in the United States died by gunfire. After 9-11 many Americans agreed with security changes that altered our freedoms, and in some cases, our rights. We agreed it was important to do so to offer a modicum of public safety. So it ought to be with guns. Cogent thoughts on this anyone?

Comments
No comments have been posted to this article.
Read all comments / Share your thoughts
Auto listings

Find a car Sell your car: List it for FREE